Rundeck vs. Crontab: Why Rundeck won

We like automation here at Oyster: we do one-command deployments using Ansible and we run a lot of other automated scripts and ETL processing on various schedules.

crontab on Linux and Task Scheduler on Windows are fine tools as far as they go. But they’re a little too simplistic: difficult to schedule, no retrying, not centralized, you can’t customize success or failure emails, almost impossible to get non-engineers to use, etc.

Enter Rundeck. It’s a powerful system, though we’re only using it in “glorified crontab with a web UI” mode, which is a fine way to start. We’ve now switched most of our cron jobs over to it, and we’re working on moving our Windows Task Scheduler jobs as well.

Below are some of the benefits for us.

Rundeck has a web UI that supports single sign-on, so anyone on our team has automatic access to it. Among other things, this means people on other teams can write ETL scripts and set them up in Rundeck without involving engineering.

The UI is also good for engineering. It allows you to create jobs, run a job, view history, and check job output. Previously to look something up we’d have to hunt through old emails, or SSH or remote into a machine and scan through log directories. Big plus. 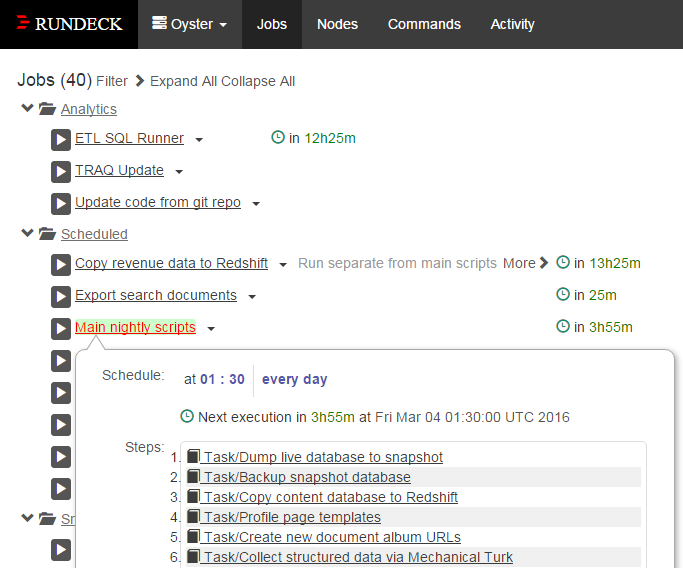 The UI is definitely better than Windows Task Scheduler (not hard to beat), but it’s not a stellar example of design. It has a very made by developers feel, with tons of detail upfront, and some common operations like looking at recent errors or log output hidden behind several clicks.

Rundeck logs all job activity, making it easy to debug when something went wrong and why. You can filter the activity history by task name, user, success/failure status, or time.

Once you’ve found the relevant run, you can drill down into it and look at all stdout and stderr output from a given command. For example: 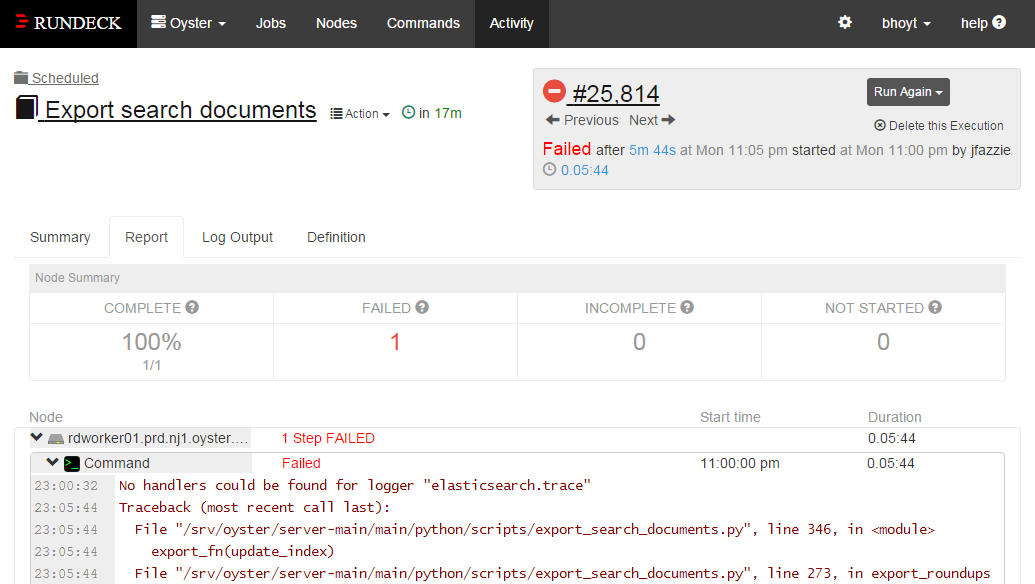 Windows Task Scheduler and crontab have very limited support for this, but with Rundeck it’s easily configurable and simple to set up. You can tell it to send stdout/stderr output from the job as an attachment to the email.

You can customize the subject line using job variables, and you can specify a custom Markdown email template if you want (we just use the default – it’s not pretty, but it is functional).

Rundeck has a simple scheduling interface that allows you to run a job at a certain time every day or on selected days of the week. It also has a more advanced crontab scheduling option to allow you to run tasks on schedules like “every 15 minutes” or “1:30am every last Friday of the month”.

Rundeck can run jobs locally on the machine Rundeck is installed on, or it can run jobs on remote machines using SSH. For most of our longer-running jobs, we have a single “worker server” that we run jobs on via SSH.

Rundeck has good support for multiple “node sources”. For example, in our installation, our techops team has set up Rundeck to use our master node list from Chef.

Rundeck also has a screen where you can run any ad-hoc command against one or more nodes. For example, you might want to check disk usage on a bunch of nodes:

One of the problems with UIs (like Task Scheduler) is that change tracking is hard or impossible. We wanted to be able to see who did what, and when. As of version 2.6.0, Rundeck has built-in support for source control integration via git. So we hooked it up to our git repo and now have a changed-tracked log of who did what to the job config.

All the project and job configuration is saved in YAML format, so is fairly easy to read, for example:

Rundeck has plenty of other features, many of which we’re not using yet:

Shout-out to our techops team who set up the Rundeck install for us and helped with various operational aspects.

If you like good engineering and automation and want to come work for us, apply here!